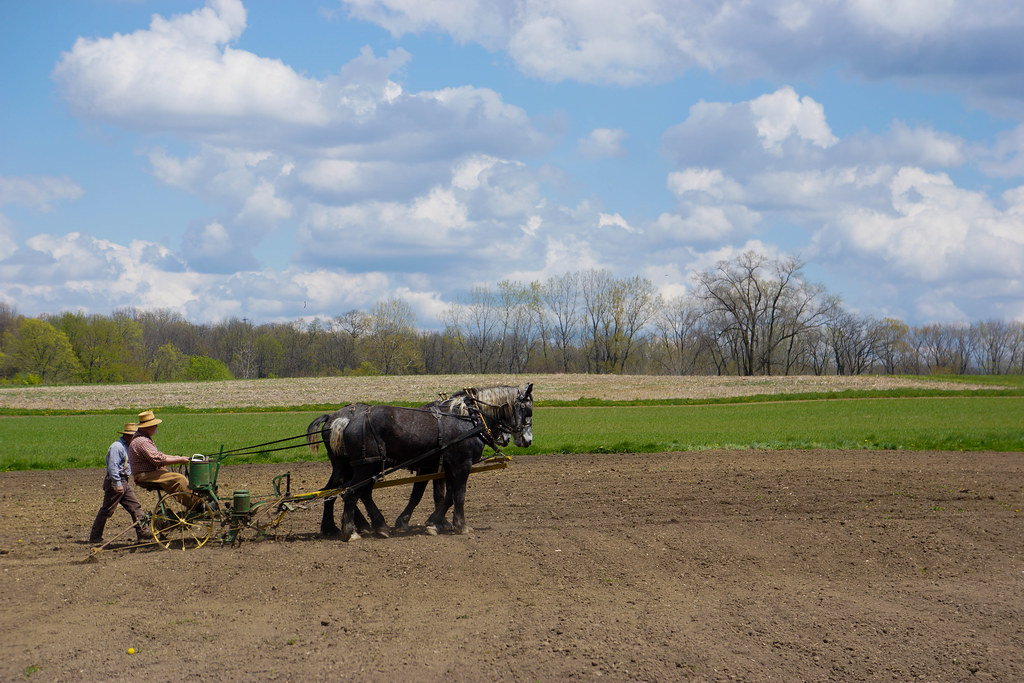 Yesterday, Jim and Charlie hitched up Charlie and Jimmy to plant corn using the old 1930s era IH seeder. Farm tractors did not become common until after the Second World War and this would have been a common sight until the late 1940s. Trivia behind us, yesterday was a perfect day to be outside in the sunshine. The sky was full of big puffy clouds and there was a cool breeze. And of course, with Charlie around (the man, not the horse), there were plenty of jokes to keep us entertained. 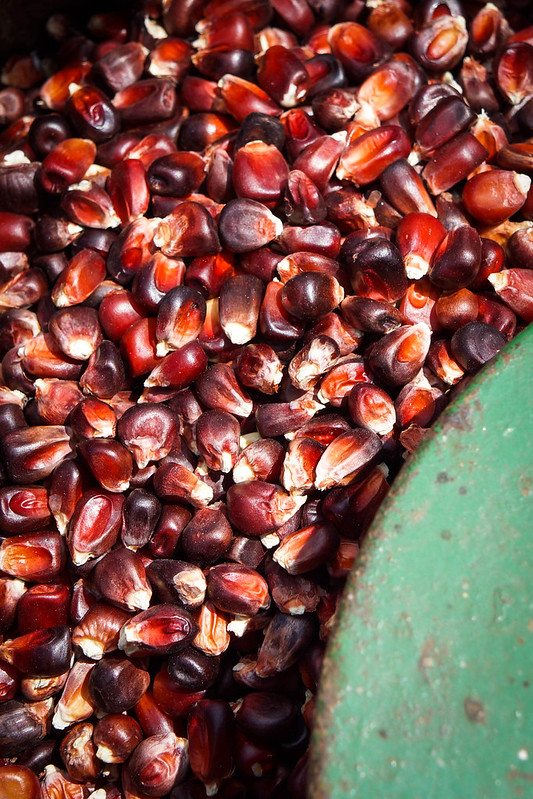 The Charlies and Jims were planting butcher blood corn. I included a picture of the seed so that you can see how beautiful it is. 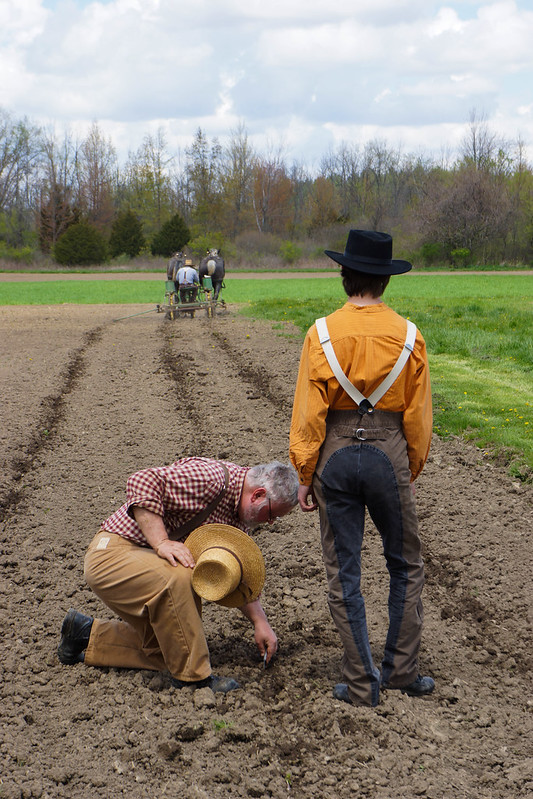 Every so often, Charlie and Noland would check the seed to ensure the old machine was working as it should. Old machines need constant watching and adjustment. 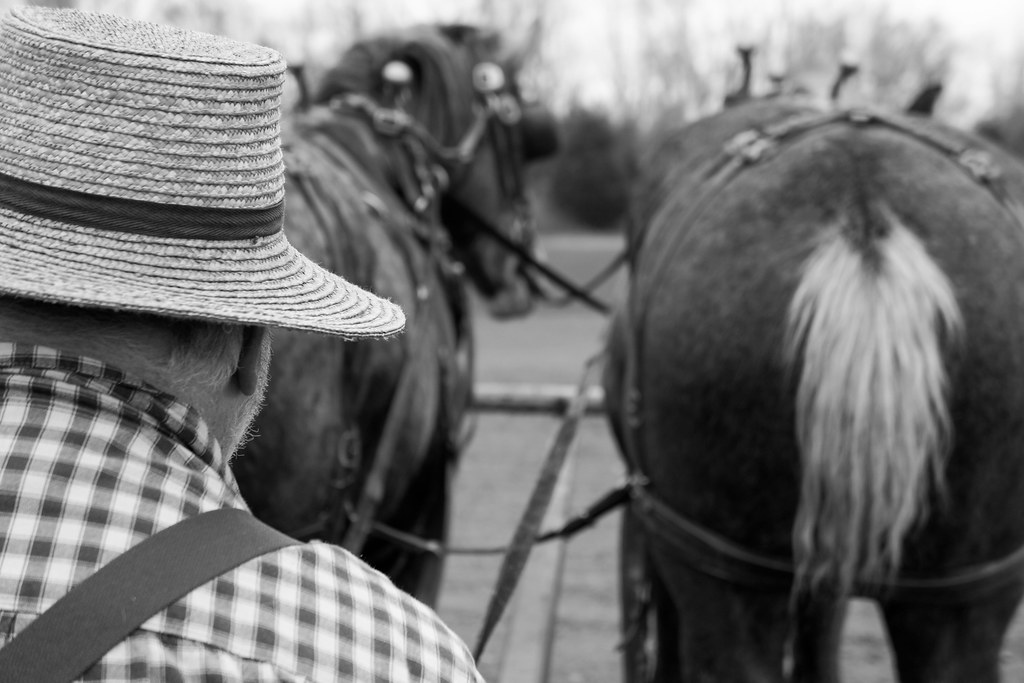 I know that you are wondering about the horses’ names. Legend has it (we only have the word of Jim and Charlie), they were visiting an Amish farmer while looking for a new pair of draft horses. When the farmer mentioned the horses were named Charlie and Jimmy, they bought them on the spot. I think it is just as likely that the two jokesters named the horses on the way home. You never know with those two.

Have a great day.

The weather has been horrendous here in Ohio. This is the winter that just won’t quit. We’ve long been into record breaking cold and snow territories. Grey skies are the norm and those of us that suffer from the winter blues have been struggling.

Fotununately, this past Saturday was one of the rare clear days. The blue skies were gorgeous. The sun made the freezing temperatures feel bearable, if just for a single day.

I couldn’t resist the temptation to go for a nice long drive deep into the farm country. Mile after mile of snow covered fields were punctuated with the occasional barn or farm house. With every passing minute, I could feel my own grey mood lifting and by the end of the long drive, I felt recharged. I’m good for a few more weeks of winter.

This morning, my friend Jim and I got up before the roosters and drove to Yellow Springs, Ohio to photograph a field of sunflowers as the sun rose.

We come to this same field every year, looking for a new way to capture the flowers. The field is so large and there are so many flowers, that I have trouble figuring out where to point my camera.

My uncle Eddie and I were driving the Ohio back roads near Newark when we came across these red lillies growing wild on the side of the road. You performed so well identifying the spider wort earlier this summer that I thought you might be able to identify these as well.

Is there anything quite like a roll inthe hay first hing inthe morning? I didn't think so.

Even the most utilitarian objects can contain beauty. This irrigation system proves the point as the early morning light is caught in the water mist, turning gold.

I took this image Sunday morning during a dawn drive through our local farm country. When I saw this cloud formation, I stopped the car and got out, camera in hand. The contrasting tones and the shape of the cloud front were what impressed me.

However, being a photographer, I couldn't settle with the beauty that I was looking at. The colors and light were not enough. I wasn't satisfied.

I wanted to see it in black and white. I knew that those tones would be spectacular in B&W. Sometimes color can get in the way of a great image, even when it is gorgeous. So, as soon as I downloaded the pictures, I made the conversion.

What do you think? Have you ever looked at a scene and just knew that it would make an impressive B&W image?

A three mule team is not a sight that you see everyday. When the farmer was putting the harness on his animals, I wonder if he thought to himself, "I got to get my ass in gear?" No? Sorry, I couldn't resist.

Touring the barn by lamplight. They sure don't give off much light and the night was cold and dark.